Group S train Saturday morning during school terms at our main training venue at Carver Baracks.  This training comprises of Bike & Run training and transition training.  Please  read the weekly newsletter for any updates to the training venues.

The aim is to introduce children to the sport in a fun way, with plenty of games with a high emphasis of developing balance and coordination skills and safety whilst cycling.

Sam Hughes is the Group Leader and can be contacted at GroupS@waldenjnr.co.uk. She is supported by Arlene McLean and Nicola Baxter and other group coaches.

You will find details of how to apply to join Group S on the membership page.

Sam is a member of WaldenTri and competed in her first sprint triathlon in 2015 (the WT15).  Previously she was based in Kent where she competed in adventure racing (running, mountain biking and canoeing, all while navigating) and orienteering as well as the occasional off-road duathlon and road running races. Sam has played in national premier league teams for hockey and touch rugby and represented England at masters level for touch rugby (2010 and 2011).

Aged 8 at the 31 December of the year race is held.

This is the youngest age group at which children can take part in a triathlon and is based on age at the end of the year. TriStarts belong to Group S of our Saturday morning training groups .

Races are usually held on school playing fields on grass. Open water races are rare and if cycling on tarmac it will be on roads without traffic. Because of the very short distances, quick transitions are very important.

TriStarts can compete in our Club Championship and in the Eastern Region Children' League and there is asummary of all races on our East Region Race Calendar. On these pages the links tell you about each race and how and when to enter. 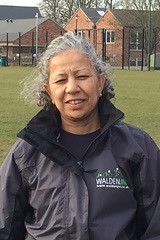 Arlene started coaching at the club when the club started in 2009. She passed the BTF Level 1 qualification in 2010 and the Level 2 qualification in February 2013. She coaches with the Senior side of the club and is a very active supporter of Saffron Seals and the local Brownee troop.